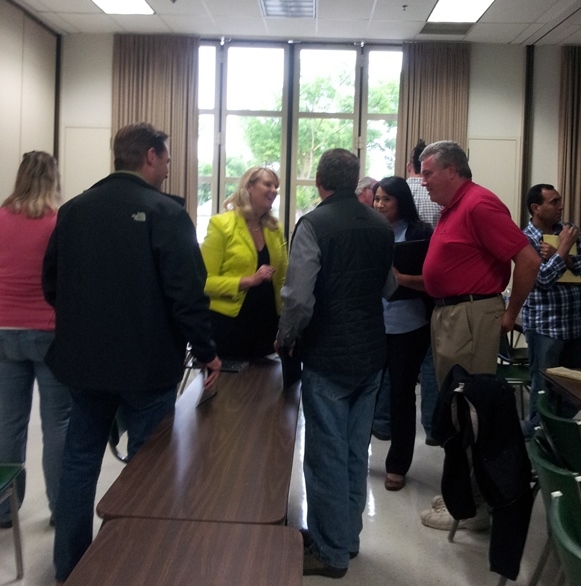 Rootstocks evaluated by UC scientists help control peach tree growth.
The production costs for peaches grown in California are heavily dependent on the costs of hand labor for pruning, thinning and harvest. This work takes a lot of time in part because farmworkers must climb up and down ladders and reposition the ladders as they move through the orchard.

UC Kearney Agricultural Research and Extension Center scientists have found that production costs can be cut dramatically by growing “dwarf” trees that minimize the need for ladder access. However, the limiting factor for peaches has been the lack of acceptable dwarfing rootstocks for the best peach varieties.

In 1987, UC and USDA scientists began a landmark rootstock evaluation project. More than 100 varieties that were either collected or bred by USDA plant breeder David Ramming were planted at Kearney. Five trees each of O'Henry peach and Santa Rosa plum were grafted on the rootstocks and extensively evaluated over the next seven years.

The research blocks with Controller 6, 7, 8, and 9.5 at Kearney are continuing to be monitored for production performance and sustained productivity. So far, their performance looks positive but, because of funding cuts, the long-term outlook for maintaining the plots is questionable, De Jong said. UC Cooperative Extension farm advisor Kevin Day is conducting trials of “controller” rootstocks in conjunction with growers to help them determine which ones best fit their farming operations.

“I think that Controller 7 may be an optimal choice for many growers because it offers modest size-control and trees on it have had excellent production characteristics and is not such a large leap to a smaller tree,” De Jong said. “However there has been limited interest in it thus far.”

Controller 5 likely makes trees too small for commercial California peach production and trees on it tend to produce smaller fruit. However, it has good potential for home gardeners who have limited space, prefer not to prune much and aren’t very concerned about fruit size.

De Jong, Day, UC Davis pomology specialist Scott Johnson and numerous students have conducted extensive research concerning the dwarfing mechanism involved in these rootstocks and published more than 10 scientific articles on different aspects of the research. These articles and more information about the California Rootstock Breeding Program are available on the UC Fruit Report website.